Described as ‘Italy’s greatest secret’ by the Sunday Times, and ‘Italy’s most intriguing musical traveller’ by Mojo, Vinicio Capossela is finally back in Brussels for a breath-taking, enchanted concert that fuses rock, theatre, and performance art, as he alone can do.

His recent tour, which started in spring 2011 with a series of sold out concerts, speaks volumes. The show, an immersion in the evocative setting of a shadow theatre, literally reproduces the songs of his latest acclaimed album “Marinai Profeti e Balene”: 19 pearls inspired by the classics of world literature about the sea and its frightful spawning of amazing human, animal, and mythological creatures.

Vinicio’s magic lies in his ability to break the boundaries of a song and to evoke, through the use of images, entire worlds in which to live through the song. They are worlds infested by demons, grace, shadows, lost souls and losers, and built on language, an element Capossela is constantly working on.

Renowned in Italy and on the continent for his enchanting concerts, Vinicio Capossela has navigated an inimitable musical path to consistent acclaim during his 20-year career, drawing on a diverse range of influences, from Italian folk to Americana and burlesque.

His early recordings conveyed a scenario inspired mainly by the American underground culture and the road myth as well as the Italian exoticism embodied by the legendary Luis Prima in the US, or Renato Carosone in Italy. In his recent works Capossela began to pursue a different direction: imagination “colics”, geographical derailments, images that would develop into ever stronger visions with each album.

From the release of his debut album “All’una e trentacinque circa” in 1990, he earned two of Italy’s prestigious Tenco awards. With “Da solo” he reached platinum certification. To date he has released 13 albums.

“A visionary songwriter. Capossela, one of the cleverest and most eccentric musicians in Italy, spins enigmatic fantasies of both skid row Americana and mythological Italy in a grittily elegant cabaret-jazz style.” New York Times 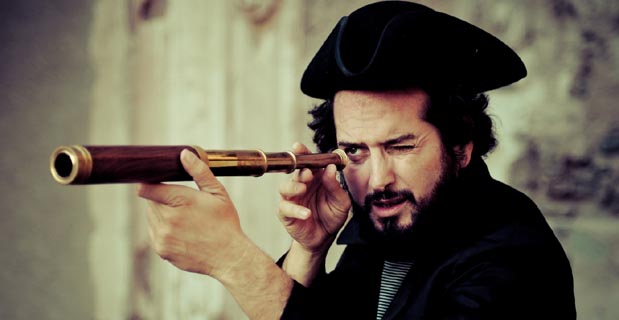