Once upon a time, there were three youngsters who lived in Bologna, who loved music, and who decide it was time for something different. After, the three became five; the beginning of their history is, first, the beginning of a friendship, born at the Radio Fujuko’s round table.   Their melodical yet electronic pop is catchy and fun, their beats simply makes you wanna move; and when it comes to the lyrics, unexpectedly strong and socially-committed, the words kick the notes, boost up the music, and get stucked in your head, with the whole song and the power of its message. That’s what they do, they fill all those light sounds, slightly pop, those electrobeats, with the shout of a youth that have something to say!

They gathered together in 2009, their alliance is leaded by a common interest in independent good music -no need to say it-, but above all from the utopistic thought that, while creating it, it is possible to chase social ideals and say out loud, simply uncensored, what the so called ‘today’s young adults generation ‘ think about society, politics, friends, sex, enemies, non-sex, etc. What’s so new, you might say; well, to succeed in such an epic challenge, is not granted at all, especially if you are a perfect unknown quintet of young songwriters with no references. But then, as in each good story who deserves this adjective, something happens, people start to follow them, to listen-like-download and share them, and suddendly, they are recording, rehearsing, having gigs up and down Italy. And you know what’s their secret? They made it, not because they wanted to reach success with music, but because their strong messages succeeded to reach people through music.

In fact, their music is energetic and constantly declaring a status of independence; like animals out of a cage, superheroes on a mission, when on stage they litterally rock every single word, every single note; the mix of their music and lyrics, of what they stood up for, melted with the “slipped out of a videogame” electronic sounds, create something so powerful, that you’ll be wondering how come that they seem twenty even if they are only five.

So here we are, proudly presenting them in one of the countless performances they’ve been holding since the band was born (more than 200), which will take place on FRIDAY, JANUARY 25th, 18:57 @ Piola.libri. 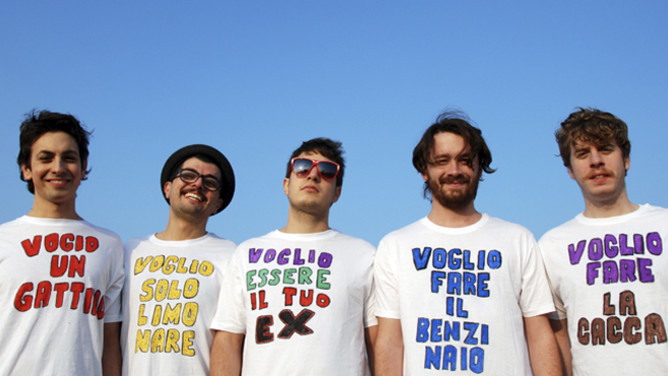