NEW LOCATION FOR THE CONCERT: TAG CITY – LES ATELIERS CLAUS @ ROGIER // AFTER THE LIVE CONCERTS FREE ENTRANCE AND TRINGLE LOOP MACHINE DJ SET UNTIL LATE // DO NOT MISS THE PARTY!!

BEIT presents in Brussels a legendary band on the Italian music scene. A group whose heart and mind have always been on the move, Casino Royale emerged in 1987, inspired by the Ian Fleming saga. Just like 007, they live for adventure, always discovering different styles and sounds in world music.

Initially influenced by the sound of The Specials and The Clash, in the 90s their music grew richer with different styles: black rock, reggae, hip hop, dub, funk. “Dainamaita” marked the passage of Casino Royale to the Italian language, and texts became more and more important in their work. Important new chapters marked the group’s discography: “Sempre più Vicini” was a nod the famous sound of Bristol, and “CRX” was defined already in 1996 as “the best record of 2006!”

Casino Royale’s adventure in music continued with “Reale” (2006), which saw the light also in a particular dub look: HowieB vs. Casino Royale “Not in the Face”. Next, “Royale Rockers” proposed a new reading of some crucial passages in the history of the band in a pumping, vintage and original reggae key, in the smoky spirit of the “session”.

In 2011 the saga continued with “Io e la mia ombra”, music speaking of lives hidden behind others existences. Not a prequel, nor a sequel. Simply a great new record of Casino Royale.

HEIKE HAS THE GIGGLES: directly from Bologna’s music landscape , they practice a hyper catchy pop with heavy punk reflections. Their tracks, leaded by a metronomic rhythm section, frantic and sharp guitars, and driven by the powerful voice of Emanuela Drei, are greatly surprising! 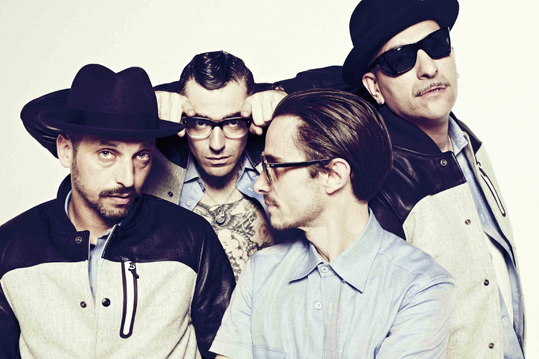